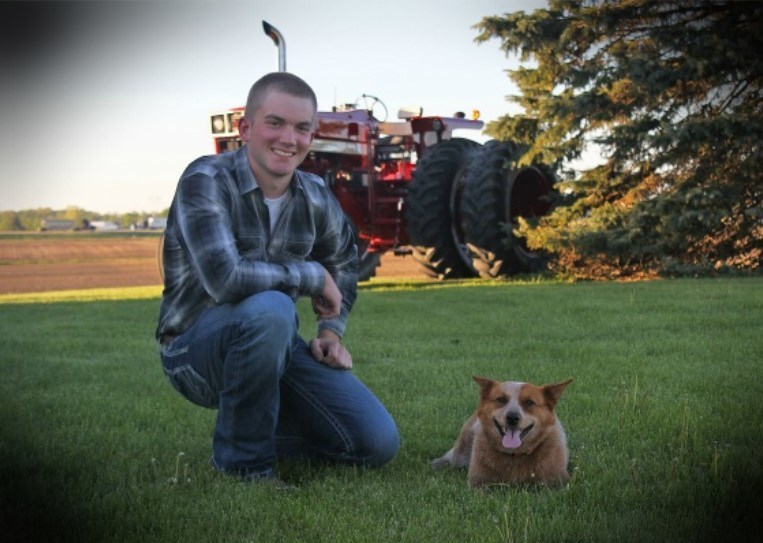 Luke Scott will represent Wynford FFA and the State of Ohio in the National FFA Star in Agribusiness. Growing up, he spent countless hours with his father and grandfather conducting all necessary activities for agricultural production. Luke knew at a very young age that he would be following in his father’s footsteps.  As he grew up, Luke started to take on more responsibilities, from picking up rocks to starting to work ground for the first time.  He was also introduced to his father’s excavation business around the same time he became involved with the farm.  Luke quickly learned the value of hard work and the benefits that come from enjoying what you do for a career.

Caring for the land has become an essential concept while working with his father, as Bill (Luke’s father) always showed how important a sustainable agro ecosystem was to everyone involved in agriculture.  Luke gained an entrepreneurial mindset from watching the excavation company grow each year and quickly started thinking of ways to start his own business.  Luke’s first thought was selling firewood, as they had a wooded lot behind their house that was easily accessible.  Spending countless hours in the woods, he used a hand saw and splitting maul to process what seemed to be enormous piles of firewood.  Luckily, Luke was able to purchase a chainsaw on his 12th birthday, which sped up the process.  As he continued the firewood business, Luke learned how beneficial it was to have the feeling of success after satisfying a customer and wanted to strive for more.  Luke continued working hard and eventually grew his venture into a respective business with a wide array of customers.

At the age of 15, Luke was presented with the opportunity to farm a field on the half with his father, to help him get a solid foundation for the years to come as a farmer.  Luke managed his half of 36 acres which fueled his passion for agriculture and entrepreneurship.  At this time, Luke was working many hours for his father at Scott Farms and Scott Excavating.  Bill told Luke that he would let him use his equipment to farm the rented ground.  Luke farmed his first field on the half for two years until Bill suggested that he was ready to farm it on his own.  Luke was able to farm the 36-acre field for one year; then, he received an opportunity to farm another 6.5 acres.  This put his operation at 42.5 acres and the two fields were on an opposite crop rotation, allowing him to be diversified at all times.  Luke began thinking about another entrepreneurial venture which led him to think about spraying. He was presented with the opportunity to purchase a retiring farmer’s Polaris Ranger ATV and ATV sprayer that he had used to spray with on his farm.  Although this sprayer was smaller, Luke decided to purchase it because it was an opportunity he could not pass up.  Luke’s first full year of spraying and the new acreage went very well.  He was able to cover many acres with the sprayer and save money by not having to pay the local cooperative for application needs.  Crops seemed to be looking very good throughout the 2017 crop season which led Luke into looking for another sprayer.  Luke purchased a 1998 Ag-Chem Rogator 854 self-propelled sprayer.    This machine helped him to cover more acreage and build an excellent agricultural service business. Luke’s crops were excellent, and he was able to obtain a contract in December of 2017 to lease another 25 acres of farmland for the upcoming seasons. Luke looks forward to the years to come as an agriculturalist and hopes to continue expanding his horizons and his operation.